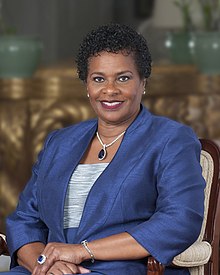 News Americas, BRIDGETOWN, Barbados, Mon 22 Aug 2021: Barbados is set to replace the Queen as head of state with a president as the country prepares to become a republic by November 30. Here are five things you should know about her.

1: This is Dame Sandra Prunella Mason, GCMG, DA, QC, who is the 8th Governor General of Barbados, with a term starting January 8, 2018. She could become the first President of Barbados and its first female President if it is approved. by Parliament in November.

2: Dame Sandra was born on January 17, 1949 in East Point, Saint Philip, Barbados. She then attended and graduated from St. Catherine’s Elementary School and Queen’s College, and soon after became a teacher at Princess Margaret High School in 1968. The following year she went to work. at Barclays Bank as a clerk and was promoted to Trustee for the period 1975-1976. She then transferred to Barclays Bank Jamaica Ltd., then returned to Barbados and continued her banking career with Barclays Finance Corporation.

Mason enrolled at the University of the West Indies at Cave Hill, where she received her LLB in 1973. In doing so, she became the first Barbadian female lawyer to graduate from Hugh Wooding Law School. She was called to the bar to begin practice on November 10, 1975, becoming the first female member of the Barbados Bar Association.

3: In 1978, Mason began working as a juvenile and family court magistrate and at the same time as a family law tutor at UWI. She stopped giving private lessons in 1983 and continued as a magistrate. In 1988, she completed the Court Administration Course at the Royal Institute of Public Administration in London.

Mason left Family Court in 1992 to serve as Ambassador to Venezuela and was the first Barbados female magistrate to hold that post. Dame Sandra was also Ambassador to Chile, Colombia and Brazil for the period 1993-1994. On his return to Barbados, In 1994, she was appointed Chief Magistrate of Barbados, then in 1997 became Registrar of the Supreme Court. In 2008, Mason was sworn in as an appellate judge, becoming the first woman to serve on the Barbados Court of Appeal. In 2013, she was the first Barbadian woman appointed to the Commonwealth Secretariat Arbitral Tribunal (CSAT). The Tribunal operates among members of the Commonwealth of Nations to resolve issues relating to contractual disputes.

4: Dame Sandra has also worked in other arenas internationally and regionally. In 1991, when the United Nations Committee on the Rights of the Child was created, she began to serve and was appointed vice president from 1993 to 1995 and president from 1997 to 1999. Between 1991 and 1992, She was also one of two women appointed to the 13-member CARICOM commission to assess regional integration.

5: Dame Sandra was appointed Dame Grand Cross in the Order of Saint Michael and Saint George after being appointed Governor General and became Chancellor. She is 72 years old and has a son, Matthew. Dame Sandra is also interested in reading, scrabble, cricket and travel.