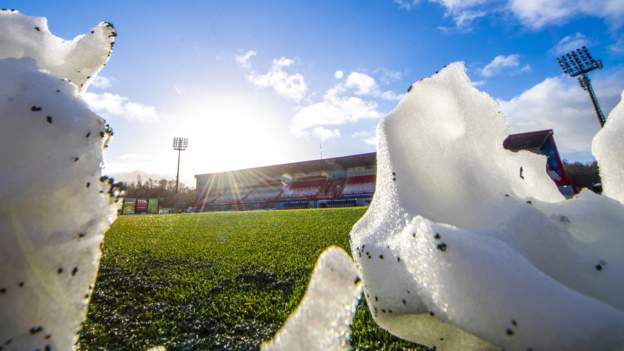 These are just a few of the potential consequences of climate change for sport in Scotland. Continued global warming at the current rate will impact every aspect of our lives, and sport is no different.

As world leaders try to find solutions at the COP26 climate conference in Glasgow this week, BBC Scotland is examining the relationship between sport and climate change in this country.

How will sport be affected?

It’s pretty straightforward, really. If carbon emissions continue at the same rate, the temperature of the earth will continue to rise, leading to more extreme weather conditions in Scotland.

This threatens all outdoor sports, whether through cancellations due to flooded fields or the safety of athletes and spectators amidst storms, heatwaves and flooding.

And while scientists’ forecasts predict that these extreme weather events will worsen, the impact of climate change is already being felt strongly.

Scotland’s world-famous golf courses are under threat due to rapid coastal erosion accelerated by climate change, and with the predicted rise in sea level their very existence is in jeopardy.

The Montrose Golf Club – the fifth oldest course in the world – has lost three meters in the sea in the past year alone and has been forced to move its tees regularly due to the rising tide.

“We’re talking about an increase in sea level of around 40cm over the next few years,” said John Adams, greens manager at the 459-year-old course.

â€œWe have weak areas in the dunes, so if we have a high tide we have problems. The calculations have been done, and it’s based on normal circumstances.

“If we get a 50 year storm it would get serious, not only for the golf course but also for Montrose.”

Football clubs like Arbroath – whose Gayfield ground is the closest to the sea in the UK – will also be affected by rising sea levels.

Meanwhile, snow sports are also threatened with extinction in their current form. A report commissioned by the Highlands and Islands Enterprise predicts a drop in snowfall over the next 20 years at one of Scotland’s main winter resorts, Cairngorm Mountain.

This is the logical conclusion to the rising temperatures, with shorter winter seasons already having an impact on resorts, with artificial snowmaking – in itself an often damaging process – now commonplace.

What is the impact of sport on climate change?

Sport does not exist in a bubble. Thus, not only will climate change radically affect sport, but sport also has an impact on the climate.

Whether it’s going to international events or building facilities, sport leaves its own carbon footprint in many ways, but the main one is that we are going to watch sport.

â€œMore importantly, 70% of the carbon footprint of large-scale professional sporting events comes to us at these events in stadiums, locked in very carbon-intensive transport systems,â€ says David Goldblatt, author and president of Football for Future, a charity that promotes sustainability in football in the UK.

â€œConsider the size of the global sports industry. It is between 500 and 700 billion dollars per year, which represents about 0.6 to 0.8% of global GDP – which is [similar to] Poland or Spain, therefore a significant contribution. “

Is sport trying to help?

Among governing bodies and clubs there are many efforts to ensure that sports run more sustainably in Scotland.

The R&A, which is responsible for the management of golf outside the United States and Mexico, has invested in sustainability and has launched its â€œGolf Course 2030â€ project. It aims to educate athletes on the impacts of climate change, and also to invest in research to provide solutions.

They banned single-use plastic bottles at the Open Championship in 2019 and are working to make their flagship event carbon neutral, having used electric vehicles and encouraging spectators to donate to planting projects in the region. ‘trees at this year’s event.

â€œThe discussion on climate change is paramount for us and we know that in all sports more attention is paid to how sports are going to be affected,â€ said Philip Russell, deputy director of sustainability at R&A.

Football is by far Scotland’s most popular sport and – at elite level – Hibernian and Inverness Caledonian Thistle are two of the clubs leading the way.

It is the only sports organization in Scotland to adhere to the United Nations Climate Sport Action Framework and is one of Britain’s three most sustainable clubs.

Whether it’s introducing bees to their training complex or harvesting rainwater, the club believes it has a responsibility to continue to introduce more environmentally friendly practices.

â€œWe are trying to be a completely sustainable company,â€ says CFO Chris Gaunt. “It’s by getting 100% green contracts, changing the lighting to LED, putting solar panels on the roof, being more vegan in the stadium, and taking our fleet and making it a fleet of cars. fully electric.

“We see ourselves as the goalkeepers of this club and we want this club to exist for the next 100 years.”

Inverness uses a biomass boiler, has installed charging ports for electric cars and is working with a company to reduce traffic in the Highlands, as well as with local authorities to have a cycle path outside their stadium.

“Football is a powerful tool for promoting good practice,” Managing Director Scot Gardiner told BBC Scotland. “A club can help make a big difference – more than a company 10 times our size because of the influence we have in public relations.”

But is it enough?

Some clubs and organizations are doing their part, but overall there is a lack of a common approach in Scotland to take action now to limit the damage from climate change.

“We need to see the federations move much faster on these commitments and start the process of encouraging and pressuring the institutions below them in the pyramid to crack.”

At Montrose Golf Club, Adams says the course has been in â€œmanaged retirementâ€ for years with â€œno plansâ€ to save it.

â€œYou could get 10, 15, 20 years out of it,â€ he says. â€œBut when the club is looking to invest a few hundred thousand people in the development of its new clubhouse, what chance do they have? They have to make a decision.

â€œThis is the long-term durable material that we need. We need to think about what we can do offshore here to prevent these waves from hitting the bottom of the dunes.

“We talked about an offshore sand engine that would dispel the waves. It’s a solution that would probably work, but it takes a will to make it work.”

In football, the Scottish FA and FBCL have set carbon emission reduction targets and pledged to do more to reduce their own emissions at Hampden Park National Stadium.

The Scottish Federation released a sustainability document five years ago encouraging clubs to invest in renewable energy sources and other sustainable practices.

They have partnered with Zero Waste Scotland to provide funding and loans to clubs, as well as for the government-funded organization to assess clubs’ carbon emissions and identify areas where they could improve.

However, adoption has been low so far as football is only just beginning the process of becoming more sustainable.

Like many other industries and individuals, sport is still grappling with the problem of climate change and most are just beginning to realize the magnitude of the challenge ahead.

However, with its broad appeal, the sport is in a unique position to lead and influence others.

Dr Rachel Gavey works with some sports organizations to help them understand how they can reduce their carbon footprint.

â€œIf a sport can do something that has an impact on the behavior of its members, understanding something is a huge thing,â€ she says.

“I see this as a really big opportunity. It’s not something that comes at a huge cost to the sport, it’s about using the incredible resources of the people they talk to and communicate with on a daily basis.”

Getting international travelers back is key to Hawaii’s recovery