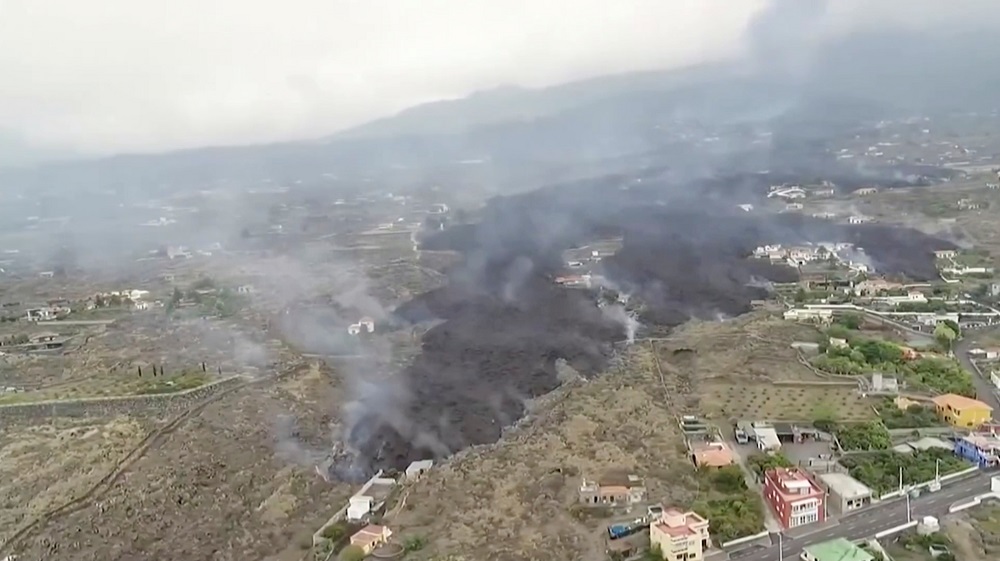 By Borja Suarez and Marco Trujillo

Families rushed to collect their belongings from their homes and escape the advancing lava on Tuesday, as sirens sounded and helicopters flew over the smoke-filled air of an erupting volcano on the Spanish island of La Palma.

Drone footage showed lava flowing west to the coast in three huge languages, incinerating everything in its path, including a school.

The heaviest flow was advancing towards a banana plantation and water reservoir as it neared the main street in the town of La Laguna, traveling at around 200 meters per hour, authorities said.

Lorena, a 42-year-old Laguna resident, ran to collect furniture and electrical appliances from her parents’ house.

â€œWe’re nervous, we take out the most essential things like mattresses, the refrigerator,â€ she said, with her family’s belongings strewn in the back yard.

The town was evacuated on Monday, but rescuers gave residents a two-hour window to return home and save whatever they could.

Almost a third of the population in the affected areas work in the banana industry, a producers’ association said.

A family of three in the town of Los Llanos de Aridane, which is on the possible molten rock path, rushed to load a Toyota van with mattresses, a refrigerator, a washing machine and bags full of clothes.

Residents of Los Llanos de Aridane had an hour to pack up and flee, a scene that has unfolded over La Palma in the Canary Islands since the volcano erupted on Sunday, forcing 6,000 people to evacuate. At least 166 houses have been destroyed so far.

Regional chief Angel Victor Torres said emergency services were powerless to stop the “inexorable” advance of lava towards the sea and more homes, churches and farmland would be consumed.

Although the total damage remains difficult to predict, he said it would far exceed the threshold of 400 million euros needed to receive aid from the European Union.

Authorities have warned that upon reaching the sea, the lava could create a cloud of toxic gases and possibly explosions as the molten rock cools rapidly.

The lava flow was originally supposed to reach shore on Monday, but is now moving more slowly. More people had to be evacuated late Monday and early Tuesday after a new lava flow started to flow from the Cumbre Vieja volcano.

“The lava on its way to the sea was a little capricious and turned its course,” El Paso mayor Sergio Rodriguez told state broadcaster TVE.

The volcano erupted on Sunday, sending lava hundreds of meters into the air after La Palma, the most northwestern island in the Canary archipelago, was rocked by thousands of tremors in the sky. during the previous days.

No fatalities or injuries were reported.

A Reuters witness saw the flow of molten rock slowly engulf a house in the village of Los Campitos, igniting the interior and sending flames through the windows and onto the roof.

As of Tuesday morning, lava had covered 103 hectares and destroyed 166 homes, according to data released by the European Union’s Copernicus emergency management service.

Emergency services said residents should not fear for their safety if they follow the recommendations.