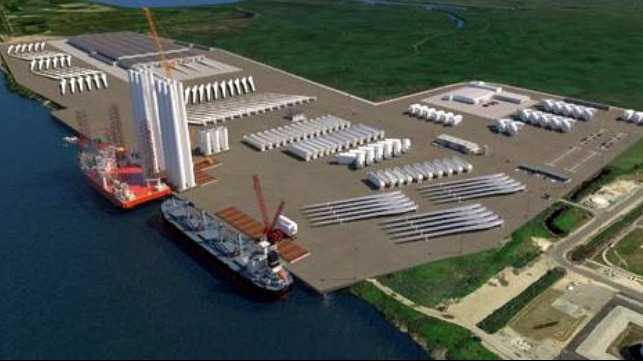 The New Jersey Economic Development Authority (NJEDA) reports that it has generated strong interest from a wide range of companies to locate operations at the developing New Jersey wind port along the east shore of the Delaware River in the southern part of the state. The goal was to develop a hub for the offshore wind industry along the eastern seaboard of the United States and based on the first round of offerings, the state is receiving interest from leaders in the development of the offshore wind farm.

Six bidders submitted 16 non-binding offers which, according to reports from NJEDA staff, met the conditions of the first round of the process. The offerings included offshore wind developers and manufacturers. All bidders submitted multiple bids encompassing different plots, project configurations and investment levels. New Jersey was seeking non-binding offers from offshore wind developers and component manufacturers on four port property plots. Two properties are under construction for the grouping, staging and final assembly of the wind turbines. The other properties are specially designed for the fabrication and assembly of offshore wind turbine components.

Three of the largest developers working on projects from Massachusetts to Maryland, Atlantic Shores Offshore Wind, Ørsted Wind Power North America and Beacon Wind have submitted multiple bids for two of the plots. Companies bid for specially constructed areas for the assembly, staging and final assembly of offshore wind turbines.

“The significant interest we are seeing in the port from many of the world’s largest offshore wind companies confirms our expectation that the construction of this unique infrastructure resource would attract the attention of the global industry and make New Jersey a leader in the US offshore wind industry, ”said Tim Sullivan, Managing Director of NJEDA.

New Jersey has pledged to produce 7,500 megawatts of offshore wind power by 2035. State officials promote the New Jersey Wind Port as the nation’s first infrastructure investment that will provide a location for essential staging, assembly and manufacturing activities related to offshore wind projects on the East Coast. At full capacity, the wind port has the potential to create up to 1,500 manufacturing, assembly and operation jobs.

Construction of the site is due to start in December for the first operations scheduled for winter 2023/2024. In the next phase of the process, state authorities will start noting the various proposals and then expect to enter into negotiations with some or all of the first round bidders.

Cyprus, Corfu, named among the best places in the world to buy a holiday home