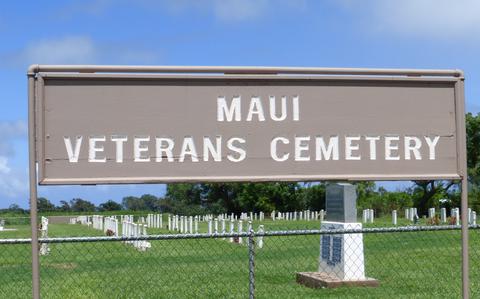 (Tribune News Service) – The good news is that the Hawaii State Veterans Cemetery has just received a $ 5.9 million grant from the Department of Veterans Affairs for an expansion that will see 1,099 concrete crypts pre-placed added behind the administration building on a 1 acre plot.

The crypts, once buried at Kaneohe Cemetery, allow teams to remove only 1 ½ feet of soil rather than digging a much deeper grave for each burial.

At the same time, the Maui Veterans Cemetery received $ 1 million from the VA Cemetery Grant program to fund the construction of 640 columbarium niches, among other projects.

The bad news is that, in a June report, the VA Inspector General’s office noted “issues of non-compliance” in the state’s system of eight veterans cemeteries, including ” critical failures ”at the Hilo and Makawao facilities.

A grave at the Maui cemetery had a temporary marker for 54 years. In Hilo, 75 markers were not properly installed and “were simply placed on the ground above the grave,” according to the Inspector General’s June 24 report. This meant that they “could be easily moved and placed on the wrong grave”.

Ron Han, director of the State Office of Veterans’ Services and retired Air Force colonel, said a complex set of circumstances led to the findings, which relate to the site of Maui and East Hawaii 1 and East Hawaii 2 in Hilo, which are considered a single cemetery.

Although the Bureau of Veterans Services exercises administrative oversight over cemeteries, operational control rests with counties and the various departments within them, he said. This means that for the veterans cemeteries on the island of Hawaii and Kauai, the parks departments manage them, Han said. In Maui, it is the Department of Public Works.

The counties “work the best they can with what they have to work with,” Han said. “They never had formal training at the cemetery.”

The National Cemetery Administration’s first basic compliance report was conducted in 2015 and 2016, he said.

“They slowly tried to solve some of these basic problems without formal training, which normally you would send people to St. Louis, and there is a cost factor involved,” Han said.

“Once again, they never ran out of burials; they have never failed to offer honor, dignity and respect to our veterans, ”he said.

In Hilo and the Maui Veterans Cemetery, Inspector General’s team “identified critical shortcomings, including lack of permanent or properly installed grave markers, inaccurate and missing grave maps, no labeling process coffins and urns and inconsistent security standards, “according to the June report.

In Hilo, a veteran’s wife had a temporary marker for 19 years. NCA sanctuary standards require a permanent marker within 60 days of burial. Two veterans had temporary markers for 12 and 13 years.

Regarding the 75 improperly installed flat beacons in Hilo, a director of parks and recreation said that “the county does not have the staff to permanently put the beacons in the ground, as required by procedures for installation of the NCA because it does not receive money from the state to manage the cemetery, ”the report said.

In Makawao, temporary benchmarks had been in place for three, five and 54 years. Two other burials still had wooden crosses, rather than VA-issued gravestones from burials in 1963 and 1990.

Although NCA staff identified deficiencies at both sites in 2015 and 2016, agency improvement and compliance officials “did not follow up cemetery officials enough to ensure that completed action plans have been submitted, ”the report says.

Between 2015 and 2020, the problems persisted and the NCA did not impose conditions to force the correction, such as withholding future grants.

The VA Inspector General’s office recommended that the NCA work with state officials to assess the eight cemeteries. “Surveillance of Hawaiian cemeteries needs to be dramatically improved,” the report said.

To resolve the issues, “we had high-level meetings” involving Major General Ken Hara, the state adjutant general, with the NCA’s undersecretary for commemorative affairs, Han said.

The state is hoping that a mobile training team can show up to provide training at the Hawaii State Veterans Cemetery. A request will be made to other counties for county staff involved in veterans cemetery affairs to come to Oahu for training, Han said.

“Our biggest thing is that we haven’t failed in this mission, touch wood, with any of our burials and things of that nature,” Han said. “Now there are things that go back (many years) and there are issues that need to be addressed. “

He added, “We will work as hard as possible with our county counterparts.”

Visit The Honolulu Star-Advertiser at www.staradvertiser.com