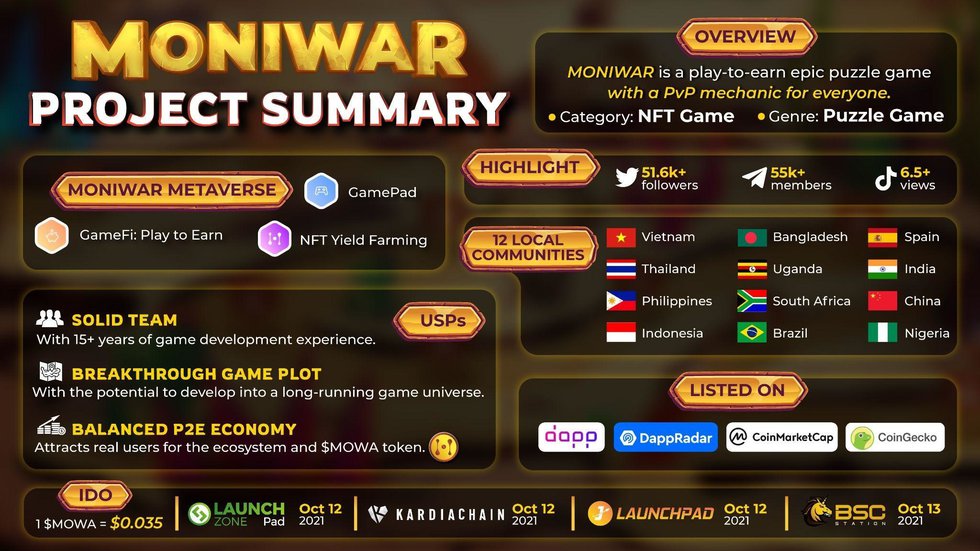 Moniwar, the next P2E phenomenon

SINGAPORE, October 8, 2021 / PRNewswire / – Crypto enthusiasts around the world are interested in Moniwar, the next big P2E gaming initiative. Although the IDO date has not yet arrived, this project has always ranked at the top of blockchain game projects with the highest social signal. Find out below what makes this project so interesting.

The main product of the project is Moniwar, a P2E puzzle action game that will be released in beta shortly after IDO.

In the conventional gaming industry, the action puzzle genre has proven to be one of the most engaging and addicting game genres. Admit this, everyone had the experience of playing one level of puzzle game after another without getting bored.

With over 15 years of expertise, the Moniwar game development team has made this core gameplay more innovative and exciting than ever. Moniwar offers a variety of fascinating game modes that players can engage in and earn more rewards every day. In addition to exploring levels and terrains in PvE mode, players can also engage in PvP activities or form groups of three to hunt monsters.

It is known that the first version of the game will only reveal 3 chapters out of a total of over 35 plot chapters. This means that the Moniwar game has a lot of potential for long-term growth, opening up a long-lasting blockchain game universe with countless fantastic characters and episodes.

A balanced P2E economy occurs when a project creates real demand for their token and stimulates trade in the ecosystem.

Players freely interact with topics in the Moniwar ecosystem including $ MOWA Token, Moniwar Shop, Moniwar Dapp, Moniwar Pets, Moniwar Game to earn profit and trade to bring income to the ecosystem. In addition, users have a series of opportunities to earn money when they are rewarded with Blind Box when playing games, farming on Moniwar Pool and Moniwar NFT Pool.

Moniwar Quadruple IDO will take place on 4 prestigious launch pads on 12 october and 13.

So far, Moniwar has achieved remarkable achievements. The project has been listed on CoinMarketCap, CoinGecko, Dapp, and DappRadar.

Moniwar’s media channels also racked up some astonishing stats, including 6.5 million views on TikTok, 51.6,000 followers on Twitter and 55,000 members on Telegram.

Thanks to the above premise, the project has continuously reached the top of the ranking of blockchain game projects with the highest social signal.

In the future, Moniwar will also become a gamepad for blockchain gaming projects. It will be a long journey. The solid foundation that Moniwar has created will create the impetus for future revolutionary developments.