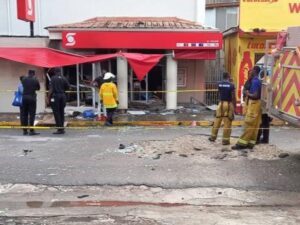 KINGSTON, Jamaica — An explosion at an automated teller machine (ATM) in the town of Port Antonio in the eastern parish of Portland on Saturday is now the subject of a criminal investigation.

Police report that early Saturday, shortly before 4 a.m. (local time), in the parish town of Port Antonio, an explosion damaged the ATM and entrance to the banking hall located on Harbor Street in the parish.

A man who was injured in the blast was hospitalized after being found with cuts, burns, a broken leg and other injuries in an incinerator at the back of the bank.

According to Jamaican Fire Department Deputy Chief Superintendent Emeleo Ebanks, when his colleagues arrived at the scene, a fire was seen coming from the building.

“We got going and after about five minutes the fire was brought under control and then extinguished.”

He said the damage was limited to ATMs, the engine room, a bathroom, two desks, office equipment and air conditioners.

“The cause of the explosion is not yet established; however, criminal activity is suspected and we are following solid leads and will make a breakthrough shortly,” he said.