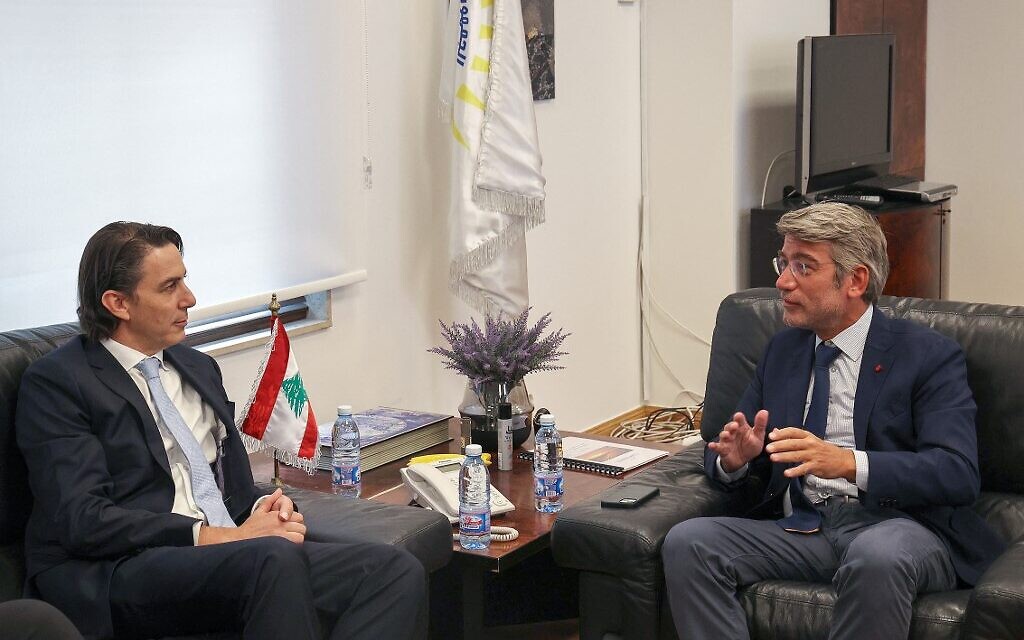 US envoy Amos Hochstein arrived in Beirut on Sunday to advance talks to resolve an increasingly tense maritime border dispute between Lebanon and Israel over Mediterranean waters with offshore gas fields, days after a Lebanese minister expressed high hopes for a deal.

“Achieving a resolution is both necessary and possible, but can only be achieved through negotiation and diplomacy,” the US State Department said in a statement ahead of the visit of Hochstein, the Washington envoy for global infrastructure and investment.

During his visit to the Lebanese capital, Hochstein met with the country’s energy minister, Walid Fayyad, and was due to meet President Michel Aoun and Prime Minister Najib Mikati on Monday.

The talks cover some 860 square kilometers (330 square miles) of the Mediterranean Sea, believed to contain vast reserves of natural gas and claimed by both countries as part of their exclusive economic zones. Because they are technically in a state of war, no sea border has ever been negotiated between them.

“Hochstein brings a new proposal to Lebanese officials, and he told me that it was positive and denied any rumors about joint excavations between Lebanon and Israel,” Fayyad said after the meeting according to the Lebanese. Akhbar al-Yawm.

Reports ahead of the meeting said Hochstein would provide Israel’s response to a Lebanese proposal for full control of the Qana gas field, which straddles the areas and is called Sidon in Hebrew, in return for giving up its claims to the gas field. Karish field, where Israel recently set up a platform, stoking tensions with the Hezbollah terror group.

An Israeli official on Sunday called Hochstein’s latest visit a “moment of truth” and said Israel’s offer was a “compromise for both sides”.

“The offer we presented is the one that would allow Lebanon to develop the reservoir that is in the disputed area,” the official told AFP on condition of anonymity.

“The purpose of the offer is to allow the Lebanese to develop it, while safeguarding Israel’s economic and other interests,” the official added, referring to the “Sidon Reservoir,” known as the Sidon Field. Cana in Lebanon.

Ahead of the meeting, Israel’s Channel 12 claimed, unsourced, that Israel and Lebanon were exploring a deal to share control of drilling in the Qana field, similar to a deal Israel struck with Cyprus in the Aphrodite gas field.

On Friday, Lebanese Foreign Minister Abdallah Bou Habib said he was more optimistic than ever about negotiations on offshore fields.

“Bou Habib added that he was optimistic about the possibility of reaching an agreement between Lebanon and Israel… noting that there has never been so much optimism as today,” said the Lebanese Foreign Ministry in a tweet.

In its boldest move, Hezbollah sent four drones to the Karish platform several weeks ago, all of which were intercepted by the Israel Defense Forces.

Images and coordinates of the Arendal Spirit platform, Energean’s floating production system and Stena’s Icemax drill are shown between clips of an apparent naval missile system being prepared.

Some clips of the gas extraction sites are dated July 30.

While Hezbollah retains some popular support, Lebanese leaders have criticized the terror group for launching the drones, saying it was an unnecessarily risky move.

During his meeting with Fayyad on Sunday, Hochstein reportedly told the Lebanese minister that the Hezbollah video was ‘neither constructive nor helpful’, especially as Israel was in the middle of an election season, which would further harden its positions, according to the Lebanese media MTV.

Israel maintains sovereignty over the Karish gas field and seeks to develop it as it tries to position itself as a supplier of natural gas for Europe, considering that this decision not only has major economic consequences, but also an important strategic.

Earlier this month, Hezbollah leader Hassan Nasrallah warned that the drones sent to the Karish field were “just the beginning” and that his group would go to war over the land. 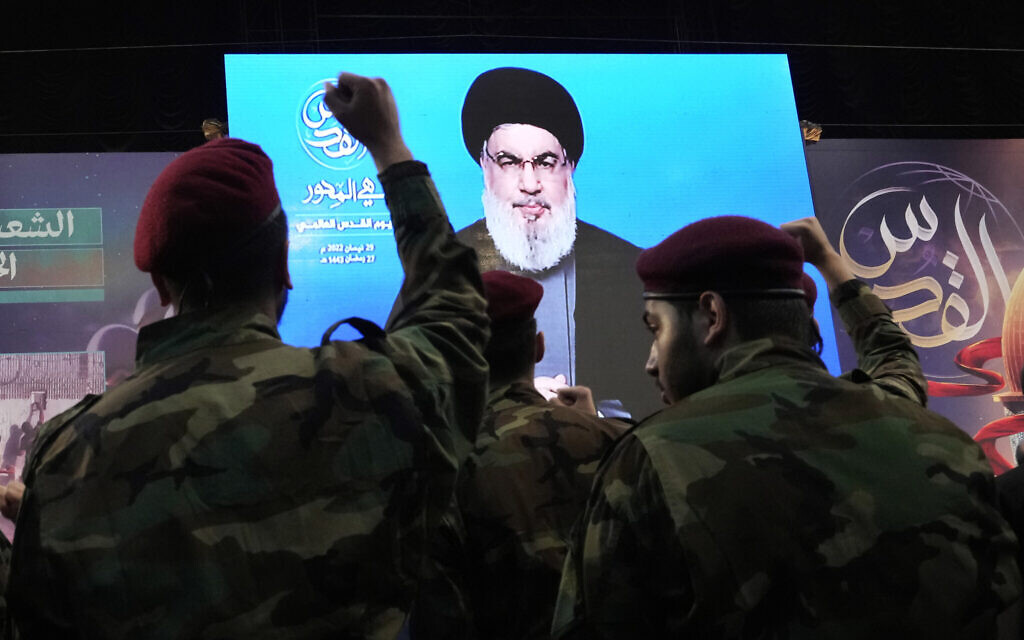 FILE: Hezbollah fighters raise their hands as their leader Hassan Nasrallah speaks via video link during a rally to mark Jerusalem Day or Al-Quds Day, in a southern suburb of Beirut, Lebanon, on April 29, 2022. (AP Photo/Hassan Ammar)

Israeli leaders countered that the country’s military would act against any threat and called on Lebanon to strike a deal so it can start extracting gas and pull itself out of its current economic slump. Israel has also issued stern warnings to Hezbollah through diplomatic and military channels.

You are a dedicated reader

We’re really glad you read X Articles from The Times of Israel over the past month.

That’s why we started The Times of Israel ten years ago – to provide discerning readers like you with must-read coverage of Israel and the Jewish world.

So now we have a request. Unlike other media, we don’t have a paywall in place. But since the journalism we do is expensive, we invite readers to whom The Times of Israel has become important to help support our work by joining The Times of Israel community.

For just $6 a month, you can help support our quality journalism while benefiting from The Times of Israel WITHOUT ADVERTISINGas well as access Exclusive Content only available to members of the Times of Israel community.

Thanks,
David Horovitz, founding editor of The Times of Israel

The art of choosing seats on flights to Hawaii

FEATURE: Birds on the Coat of Arms of the Caribbean Territories